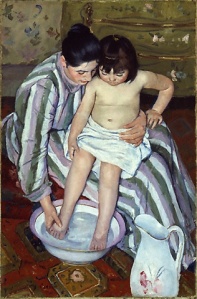 “Even if I’m setting myself up for failure, I think it’s worth trying to be a mother who delights in who her children are, in their knock-knock jokes and earnest questions. A mother who spends less time obsessing about what will happen, or what has happened, and more time reveling in what is. A mother who doesn’t fret over failings and slights, who realizes her worries and anxieties are just thoughts, the continuous chattering and judgement of a too busy mind. A mother who doesn’t worry so much about being bad or good but just recognizes that she’s both, and neither.

A mother who does her best, and for whom that is good enough, even if, in the end, her best turns out to be, simply, not bad. ”